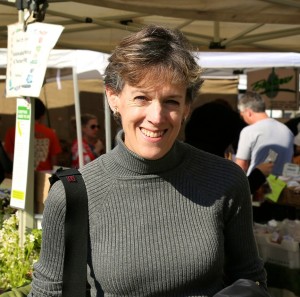 Lucinda enjoyed an unusual upbringing in Charlottesville, Virginia where her father was a university doctor and her mother an early innovative organic farmer (beginning in 1961). From an early age, she worked with her mother, sisters, and brother on their 80-acre organic farm in Sugar Hollow, nestled in the Blue Ridge Mountains.  They managed beehives, organic gardens, berry patches, apple orchards, cider-making, pigs, and cows.  They ate hand-churned butter and made their own soap.  Lucinda developed a discerning tongue for the best flavors in everything from blackberries to rare apple varietals.  For a short time, their pet goat slept at night in the bathtub.

Lucinda earned her B.A. in History at Guilford College and studied in London and Paris and later took a Wedding Cakes course at the Culinary Institute of America in Hyde Park, New York. She began her professional pastry career as a pastry cook at San Ysidro Ranch  in Santa Barbara where she won an award for rediscovering and reviving the original San Ysidro orange marmalade.  The highlight of her time there was making dessert for Julia Child.  She then became the Pastry Chef at Clifton Inn in Charlottesville, Virginia for two years where she made desserts for the Finance Ministers of the G7 Nations.  Later, she was named Pastry Chef at the newly opened Poplar Springs Inn & Spa near Washington, D.C.  The key to Lucinda’s passionate dedication to food always goes back to her childhood experiences on her family farm in Virginia.

Lucinda has also stayed busy with careers in business and media, starting her business career at Gallup Poll of Princeton, New Jersey.  She has worked with small companies and Fortune 500 companies.  In 2012, Lucinda produced the feature film, My Fool Heart, starring numerous music legends including Merle Haggard and Dr. Ralph Stanley.  She is currently producing a series of new documentaries including a feature documentary on Edna Lewis.  Lucinda has experience producing commercials and videos for clients in food, music, nonprofits, and the arts.